Winchmore Hill Football Club was founded in 1920 as a self managing section of Winchmore Hill Cricket Club, although a Winchmore Hill village team was in fact previously formed in 1898 under the Presidency of Mr W T Paulin, and some members of the cricket club played for the team. However they had their financial difficulties and lost their ground in 1903 before moving to another site and played continuously until 1913/14 season when it then ceased to exist at the outbreak of the Great War in 1914.

Returning cricket members after the war persuaded other members to form a scratch football side to play on a wandering basis, and then on 16 May 1920 at St Paul’s Institute, the constitution of Winchmore Hill Football Club was decided upon. An invitation to play at the Paulin Ground - the home of Winchmore Hill Cricket Club - was accepted for a fee of £15 for one pitch. 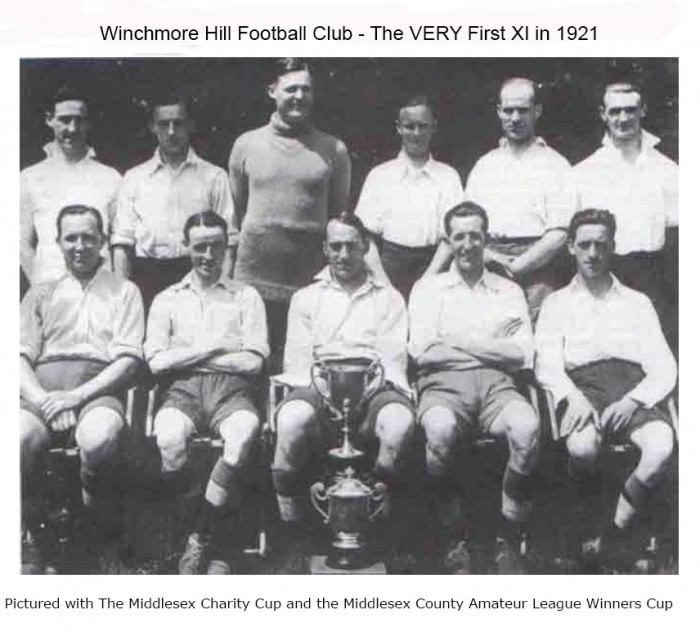 Games for the first year were on a friendly basis, mainly in north London, and the following year they applied for league status and entered the Middlesex County Amateur League with two teams. Changing facilities were spartan with the cricket club’s small pavilion being used by the football club, whilst visiting teams were housed in round corrugated iron sheds. The rent was £25 a season, raised soon after to £30 upon the opening of the new pavilion.

In 1922/23 the 1st XI team entered ‘B’ Division of the Southern Olympian League together with the AFA Senior Cup. Early playing difficulties were overcome during the 1920s and the first trophy arrived when the 1st XI won the AFA Middlesex Senior Cup in 1926/27, and the league title the following year. The die was cast, and soon after the club were elected to Division III Senior and Junior of the Southern Amateur League, with the addition of a 3rd XI team, and this has remained our league competition to the present day. 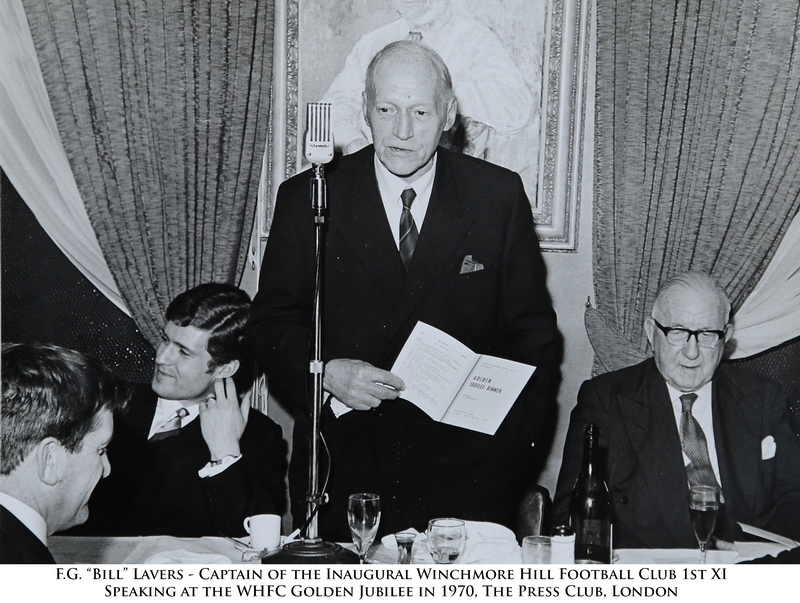 Although the 1939/45 war brought competitive football to a halt, the club nevertheless continued to function: to provide a game for serving members on leave: to attempt to fulfill its obligations to the parent club: to provide an opportunity to friends and visitors to watch a game and share the amenities of the clubhouse: lastly to keep, if possible, the structure on which to build a more flourishing club once happier times returned. This led, in 1950, to the need for a new constitution together with the re-formation of a ladies hockey section, plus the suggestion that the football club should cease to be a self managing section. At the AGM of the parent club on 29 January 1950, the new constitution was approved and the football club became a fully integrated section of the parent club, and with effect from 1st October 1950 it enjoyed equal status with the cricket and other sections.

The platform was laid in the early post war years, and in the late 1940s and early 1950s the club enjoyed its ‘purple patch’ with the 1st XI winning six championships in nine years, and the club quickly went from strength to strength with more members, more teams, and more trophies. Over the decades we have enjoyed tremendous on field success and the club has grown to comprise eight competitive teams now playing on Saturdays in league and cup competitions under the governance of the Amateur Football Alliance. We also have two veterans teams playing on Sunday mornings. 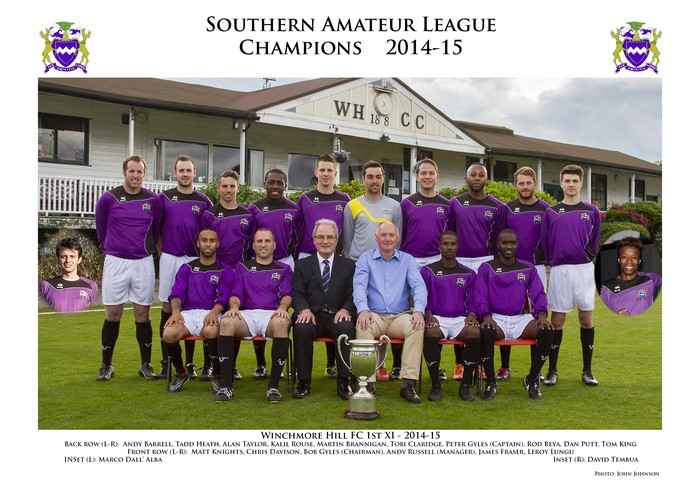 The club colours of purple black and white were well entrenched in the playing kit, and in 1957 a sub-committee of all playing sections designed a club badge which incorporated deer (which links it to the Arms of the Borough of Southgate) as well as the great Cedar Tree, which overlooks the top of the front of the ground, together with the New River which also bounds the top of the ground. The motto was added, ‘Amicitia Per Ludos’ which translates to ‘Friendship Through Sport’.

In the early days the club had just the one pitch at the top of the ground near the New River, and the present pavilion which was built in 1923 has undergone several modernisations and extensions over the years. As post war expansion began, the 1st XI moved to a newly created pitch in 1946/47, more or less where the current centre pitch is, with the lower teams playing on the top pitch. In 1948 a Ground Development Committee produced a five year plan which extended the tennis courts, re-sited the car park, and produced a third football pitch for the 1948/49 season. In the 1960s, as the number of teams grew, an additional pitch was hired from the local council at nearby Firs Farm and this remains the case today.

In 2006 an ambitious project partly funded by the Football Foundation, the English Cricket Board, and an inheritance from past long term member Alan Bacon, saw the provision of four new cricket nets for the cricket section and a floodlit astro training facility for football and hockey known as a MUGA (Multi Use Games Area). This has transformed the training and coaching for adult and youth alike, and has become the most intensely used facility at the club. It also saves over £10,000 a year in hire costs for external facilities.

The earliest recorded youth teams arrived with the formation of a junior section from 1958 to 1963 for under 16s and 18s, but this came to a halt in that final year following the big freeze of the 1962/63 winter. For the next 30+ years various youth teams played under the colours of the club in local youth leagues but without any formal framework or governance from the adult football section, although there was an attempt in 1977/78 to improve things with a new youth policy and the introduction of two youth sides. However this too stalled and with precious little coaching nor formal link with the club, few of the youngsters progressed through to the adult section.

This was all to change in the late 1990s when the football club committee resolved to bring the five then current youth teams within the administrative control of the club. A youth committee was formed and a new financial system adopted, to ensure all youngsters became members of the club. Playing kit was standardised as far as possible, and external floodlit training facilities were found to accommodate all teams. This was just the start, and following the appointment of Andy Russell as coach to the adult first team in 1999 the whole approach to youth football was to change.

It started with the introduction of soccer camps in the school holidays at the club which proved popular with local children, especially with the quality of coaching that Andy and his coaches were able to provide. The consistent methods adopted by these FA qualified coaches and the obvious benefits and enjoyment for local children, persuaded us to commence football for the community on Saturday mornings and this grew rapidly in popularity.

The next step was to form a development group for six, seven, and eight year olds, with an invited list of talented youngsters chosen from various soccer camps run by Andy, and from our community football scheme. Competitive football was then introduced as an under-9s team run by a coach for both midweek training and weekend games, this being a complete departure from the past where teams had a parent manager. The whole emphasis had now become football and skills development at a consistent level from an early age and within a team environment. This enabled the youngsters to grow and develop with their peers and form friendships and social relationships along the way which stands them in good stead as they progress through the football age groups, and eventually step up into adult football. Some of our coaches have also gone in to local schools and this has helped to underpin our relationship with the community. We applied for and gained FA Charter Standard for our youth section in February 2003.

We now have a fully integrated youth section which is flourishing with a thirty strong development group, and teams playing from under-9 to under-18. We have already begun to reap the benefit as some of the original youth teams have matured and players have made the transition into adult sides. The quality is there for all to see, and some players have already progressed to the top three adult sides in the club.

The evolution of youth football at Winchmore Hill has been welcomed by all involved with the club. Quite apart from the obvious benefits of developing quality footballers for the adult section at a time when many amateur clubs are struggling to attract players, we are also able to head off the modern trend of young footballers dropping out of the game when they reach their late teens. We can provide the important platform of continuity and combine it with a social environment in a club that embodies football, cricket, tennis, hockey and table tennis.

This site uses cookiesUsing this website means you're ok with this. Read more